I think its so cool that you can pick up the guitar and create something that didn't exist 5 minutes ago. You can write something that no one's ever heard before. You have music at your fingertips.
- Michelle Branch

Seycove offers a comprehensive band program, including courses in concert band and jazz band. Within these classes, there are opportunities for students to perform in chamber ensembles and combos as well.

There are three concert bands: As well as two Jazz Bands:
Concert Band offers students an opportunity to learn music fundamentals and nurtures their ability to perform in a large group setting. The concert bands are the groups that tour and perform most frequently. Students will perform a variety of different musical styles in this class. Concert Band is open to students of all levels of musical ability.

Jazz Band is an advanced enrichment course for students looking for an extra challenge! This group performs difficult music and works on more complex concepts of music through genres like Jazz, Rock, Funk, Blues, Latin, and more. Jazz Band classes take place outside the timetable. 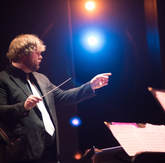 Chris Barnes is a Vancouver local whose played music all around town! Chris has a degree in Jazz Studies from Capilano University where he studied with Juno award winning saxophonist Steve Kaldestad. Chris played with many groups at Cap including the Capilano A Band and B Band under the direction of Vancouver greats like Brad Turner and Dennis Esson.

Chris did his teaching practicum at Sentinel Secondary under the expert direction of esteemed band director Michael Toth. During this practicum Chris conducted the music for The Wizard of Oz musical put on by Sentinel Stage. After obtaining a B.Ed from UBC Chris very quickly came to work at Seycove.